Perhaps no technology trend has had a bigger impact on facilities management than the investment into “smart” building technologies. This already-multi-billion dollar market is growing leaps and bounds, featuring tech that ranges from optimized climate control to smart parking garages and self-cleaning bathrooms, plus many other use cases both known and still to be imagined.

A smart building is loosely defined as a building or structure that uses automated processes to manage and control its operations (HVAC, lighting, security, and a variety of other systems). It does so via a fully integrated network of sensors, actuators, and microchips that all generate a constant stream of raw data that can be converted into key insights. Such insights are then harnessed for continuous improvements such as cost attainment and greater overall efficiency. This is where a platform such as Service Automation really shows its mettle, converting all this complex data into actionable information tailored specifically for facilities managers.

Perhaps the most important and widespread smart building technology, the Internet of Things (IoT) is a system that uses a common Internet Protocol (IP) platform to connect multiple devices (such as sensors or microchips) to exchange and analyze information, optimizing each device’s controls automatically. When aggregated across an entire building, IoT allows for asset digitization throughout – and, therefore, immediate improvements in efficiency.

IoT has become most prominent in its “smart home” use cases – such as self-learning thermostats and smart utilities meters. Recently, numerous applications have emerged within commercial and industrial settings, both improving upon internal operations (through IoT-enabled Asset Condition Management, for instance) and enhancing the occupant experience. In most cases, IoT enabled devices are controlled and linked over the Internet via a mobile app, providing a convenient and user-friendly experience for those who utilize them.

One powerful application of IoT in commercial facilities? Smart restrooms. Believe it or not, the quality and cleanliness of washrooms (or lack thereof) typically generates the most complaints from occupants and will easily drive customers away. IoT sensors resolve issues even before they happen: smart soap and paper towel dispensers, for instance, digitally alert cleaning crews when levels are running low, or even self-restock as needed. Intelligent occupancy trackers determine when a restroom is full and, via a mobile app, allow visitors to find out its approximate wait time. On the back end, this kind of sensor also schedules cleaning crews after a set number of visitors have passed through.

Artificial Intelligence (AI), like IoT, is a buzzword that’s been getting quite a bit of attention lately but is frequently misunderstood. AI is the process by which machines or software mimic human behavior and intelligence, with an ability to both acquire and apply knowledge. This allows for automation (basically, decision-making) within the machine or software without human intervention. Machine Learning (ML), often confused as a synonym for AI, is, in fact, a technique for realizing AI: It refers to the process by which a machine acquires knowledge or skill.

The applications of AI within smart buildings are extensive, especially being that AI is easily integrated with IoT sensors and devices. Such devices apply deep learning to hierarchically understand objects and environments, making adjustments according to learned user preferences or an analysis of historical trends.

For example, an AI and IoT-enabled asset management system will pick up on abnormalities in asset functioning – like a leaking refrigerator – based on what it has “learned” about the machine’s energy intake or output when functioning normally. AI-enabled Service Automation software then predicts upcoming maintenance and even reviews and approves work orders with minimal human intervention.

Building Automation is a comprehensive infrastructure that allows for centralized control of a building’s HVAC, lighting, security, and other systems. Building Automation is controlled by either a Building Management System (BMS) or Building Automation System (BAS) – a central digital or mobile hub. These systems are compatible with IoT solutions, as well, and are capable of monitoring and controlling important factors such as temperature, humidity, electricity, water pressure, and so on.

The benefits of Building Automation include increased energy efficiency, reduced operating costs, and improved occupant comfort as a result of a centralized network and carefully-aligned controls. A Building Automation System could, for example, be programmed to turn up the air conditioning and increase ventilation in a specific conference room when it registers that someone has turned on the conference room’s lights. It even works in conjunction with AI and IoT technologies, “learning,” for instance, that this conference room is used from 10:00 -11:00 a.m. every Tuesday and then adjusting its climate settings several minutes in advance.

Drones aren’t just valuable for taking aerial photographs or delivering packages: They can also be used inside a building or retail space to provide intelligent support, taking over many routine or time-consuming tasks and freeing up employees to focus on more important things. Defined as an “unmanned aerial vehicle,” drones are operated remotely and may also employ AI to operate autonomously.

For a “smart” office space, retail facility, or even a grocery store, drones complete an enormous variety of tasks that benefit their operators: From scanning shelves for expired produce to inspecting hard-to-reach equipment such as rooftop machinery to detecting intruders at an office building, they serve as an additional set of easily-maneuverable “eyes” that detect minute details and function at all hours of the day. Better yet, drones are cost-effective, agile, and relatively easy to deploy.

Building Information Modeling (BIM) is an intelligent 3D model-based process that records and displays the physical and functional characteristics of a facility. Historically, BIM has primarily been utilized by AEC (architecture, engineering, and construction) professionals, but it has recently become more widespread within the facilities management context.

A highly practical resource for both facility maintenance and ongoing use, BIM serves as a “building handbook” of sorts that allows access to real-time asset profiles as well as improved awareness of asset locations (like where exactly a certain electrical circuit or piece of machinery is placed behind a wall). Beyond geographic information, it provides insights on spatial awareness, light analysis, and quantities and properties of building components.

This kind of visual and spatial information is incredibly helpful during facility repairs or renovations. Using BIM software, one can essentially “grab” a wall object and move it around to determine if it could be placed elsewhere. This process reveals opportunities for better utilization of space and increased building efficiency. In addition, BIM allows for endless test scenarios without ever having to physically touch the space – meaning reduced downtime and decreased labor spend.

Augmented reality (AR) is a live, copied view of a real-world environment whose elements are supplemented by computer-generated sensory input. Typically involving a camera and some sort of viewing device – such as a tablet, smartphone, or even eyeglasses – augmented reality superimposes a non-real object onto a view of one’s real, physical surroundings. 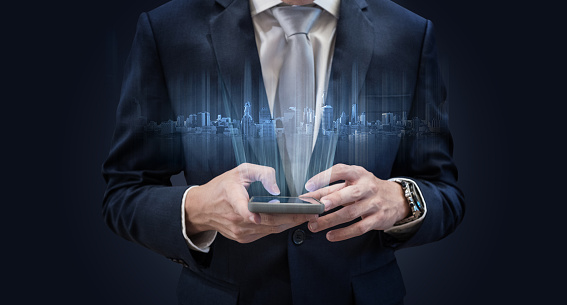 For facilities management, AR technology is especially useful when used in conjunction with BIM. Imagine, for example, putting on a pair of AR-enabled glasses (such as the Microsoft HoloLens) when examining a plant room full of various unfamiliar electrical and mechanical equipment. Programmed with existing BIM models, your glasses allow you to view digital representations “hovering” over each piece of equipment, providing identification and added detail. This information might include written instructions, warnings, dates of installation, and troubleshooting for problems ­– all of which are especially useful during outages or emergency situations.

Virtual reality (VR) takes computer-generated sensor input a step further, creating a complete immersion experience by shutting out the physical world and transposing the viewer into a realistic, virtual environment. VR has already been embraced by the design and construction industries as a useful tool during the mockup phase. VR-powered mockups allow a client to experience a proposed building as if actually entering the space: The client can walk around, examine windows and staircases, and get a feel for the experience and flow of the completed structure before any construction has begun.

While virtual reality is still far from widespread within the facilities management industry, the technology has begun to become more powerful and affordable over recent years. The potential benefits are far-reaching: Dynamic quality checks, 3D internal design review, and even virtual walkthroughs are all made possible with VR equipment. VR data can also be imported into facility management software and utilized for maintenance and upkeep. Several startups have already begun exploring VR within the FM context: New York-based IrisVR, for example, offers two solutions (desktop software and a mobile app) that integrate 3D BIM models into VR to provide collaboration and design review opportunities at a 1:1 scale.

According to a report conducted by Market Research Future, the smart building industry is expected to quadruple its previous market valuation of $7.45 billion in 2017, reaching a net worth of $33.7 billion by 2023. The driving force behind this statistic is likely attributed to increasing pressure on businesses to get “greener” and lower their overall energy consumption – along with the added perks of greater employee productivity, streamlined facilities management, and improved customer experience. But do these benefits deliver enough ROI to justify spend on costly “smart” technologies?

The answer is a resounding yes. Smart building technologies – especially when integrated with a Service Automation platform – can modernize the facilities management process, making it a strategic function for business operations as opposed to an afterthought. A highly connected infrastructure with machine learning capabilities removes the burden of mundane, repetitive tasks (like manually combing through work orders) for facilities management teams and allows them to instead play a fundamental role in optimizing a business’ customer, employee, and occupant experience. This, in turn, has an immediate impact on revenue – especially when it comes to brand uptime and savings on asset management.

C-suite executives and FMs alike must carefully conduct cost-benefit analyses of smart building technology in order to fully understand the potential impact on operations and long-term business consequences. While the initial changes may be disruptive, a “learn fast, fail fast” mentality will ease the transition. After all, these technologies are getting smarter by the day – and they’re far more than a passing fad.