Refrigeration and air conditioning are arguably two of the greatest innovations of the 20th century, having reshaped societies everywhere by improving health, sanitation, and overall quality of life. ‘What happens in Vegas,’ for example, wouldn’t be much without refrigeration and air conditioning keeping all those gamblers, diners, and entertainment seekers oh-so-comfortable inside the mega-towers that line up the city blocks.

In fact, the restaurant, grocery, and healthcare industries would be practically defunct without refrigerators and air conditioning – and our modern-day infrastructure would make it next-to-impossible to return to the 19th-century practices of ice harvesting and storage. But are there ways in which we can better control or prevent the damage done by today’s high-tech refrigeration systems? Can we do so while keeping operating costs low? The answer to both questions is a definitive yes.

In recent years, refrigeration technology has become far more advanced than the Freon-powered clunkers of the 1960s. Businesses can significantly increase both their energy efficiency and sustainability by implementing new technologies when it comes to managing, maintaining, and retiring refrigeration systems. In this blog, we’ll examine a few of the most promising, environmentally conscious refrigeration technologies on the horizon – as well as key considerations for maintaining EPA compliance with traditional, compressor-based systems.

Anyone in the facilities sector is likely familiar with the strict refrigerant management regulations put forth by the EPA. These regulations are designed to minimize environmental damage by controlling the release of ozone-depleting substances (ODS) including:

The Montreal Protocol set regulations for production and consumption of these substances in the 1990s; CFCs were phased out in developed countries in 1996, soon to be followed by HCFCs (phased out by 2020) and HFCs (reduced by 85% by 2036). Today, however, HFCs are still the most commonly manufactured and distributed refrigerant type.

Direct emissions of ODS typically occur during maintenance of refrigeration systems or upon their disposal, when the ozone-depleting gases trapped within the machine’s insulating foam and refrigerant charge are released into the atmosphere. Equally problematic, however, is when refrigerant leaks take place during regular operation.

Facilities managers are generally responsible for addressing refrigerant leaks when they occur. Making sure to adhere to EPA regulations in doing so – which involves understanding leak rate thresholds and tracking all refrigerated assets – is incredibly important.

Case in point: Trident Seafoods, one of the largest seafood processing companies in the United States, was recently fined $900,000 for failing to repair leaks of refrigerant R-22 (an HCFC), allowing over 200,000 pounds of the chemical to be released into the atmosphere. The settlement also required that Trident spend up to $23 million to reduce coolant leaks, improve compliance, and employ alternative refrigerants.

As this example proves, businesses that are proactive about maintaining refrigerant compliance and implementing sustainable refrigeration systems will not only benefit from a decreased carbon footprint – they’ll also avoid hefty fines and costly, unplanned asset replacements later on.

The following three technologies show significant promise for the future of sustainable refrigeration. While not all of these options are yet available on a large scale for retailers, businesses, or other commercial facilities, they have the potential to be adapted and made more prevalent and useful over time.

Carbon dioxide (CO2) is a natural refrigerant that’s actually been in use since the 1800s. Popular in the early days of refrigeration, CO2 was largely phased out by the 20th century due to concerns around the high-pressure environment required for its function and the toxicity of ammonia, which was used in conjunction. However, it has recently reemerged as a top candidate for sustainable refrigeration now that other technological improvements have made these factors less of a problem. 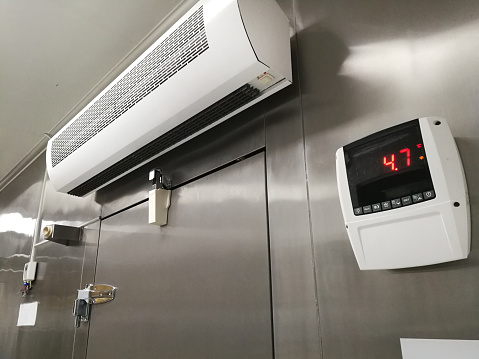 An abundant, naturally occurring substance, carbon dioxide is one of the most attractive refrigerant options from an environmental standpoint: Its Global Warming Potential (GWP) is only 1, whereas HCFC-22 has a GWP of 1,760. It is non-toxic, non-flammable, and non-ozone-depleting.

There are several commercial CO2 refrigeration systems available today. Zero Zone, for instance, offers a ColdLoop™ Refrigeration System that puts CO2 to work in conjunction with standard HFC refrigerants. This minimizes the possibility of refrigerant leaking by as much as 20% when compared to traditional refrigeration systems, making the system easier to maintain and far more sustainable for grocers and retailers.

Thermoelectric cooling is the process by which heat is transferred from one dissimilar metal to another – the result of the Peltier effect – when an electric current is passed between them. Also known as “solid state cooling,” a thermoelectric cooling system consists of a semiconductor based bi-metal junction, a heat sink, and DC power. These units are far more energy efficient than traditional, compressor-based refrigerators: They operate silently, with no moving parts, liquids, or chemical refrigerants.

However: Thermoelectric coolers require more electricity to operate than traditional refrigeration systems and have a limit to the total heat flux (i.e. change in temperature) that they are able to generate per unit area. Most thermoelectric coolers can produce a maximum temperature difference of 70 degrees Celsius between hot and cold sides, and these types of coolers are limited by their environment – if the external climate is very warm, the cooler will become less efficient.

Currently, thermoelectric coolers are primarily sold to consumers in the form of compact wine chilling systems and portable camping coolers due to their limited capacity. Innovators such as North Carolina-based Phononic, however, are now working to scale the technology to create full-size, full-capacity refrigeration systems using powerful, 50-millimeter semiconductor chips. Phononic secured a deal with Pepsi Bottling earlier this year to use its solid-state refrigerators in supermarkets across the USA – so it wouldn’t be surprising to see more of these efficient, environmentally-friendly cooling systems popping up in major retail spaces in the coming years.

Magnetic refrigeration is a technology that uses the magnetocaloric effect for cooling. We’ve all experimented with magnets as children – but one lesser-known phenomenon that takes place when a magnetic field comes near a piece of metal is that the metal actually begins to heat up. How? The electrons in the metal begin to line up and spin in one direction, causing rapid vibration and, therefore, heat.

Of course, heat isn’t exactly useful for a refrigerator. But the opposite can also happen. Explained by Gizmodo,

Magnetic refrigeration systems have the potential to reduce energy usage by up to 30 percent, according to CIBSE Journal; similar to thermoelectric systems, they require no refrigerant. These systems are already in use in many laboratory settings, but their main limitation has to do with the relatively small temperature difference that can be achieved during the manipulation of the magnetic field.

A typical supermarket refrigeration system has an annual leakage rate of nearly 25 percent: a significant amount, considering both the costs to replace leaked refrigerant and the potential fines for failing to do so in a timely manner. In addition, a 25 percent leakage rate spread across the tens of thousands of grocery stores in the US translates into approximately 206 million pounds of damaging chemicals released into the atmosphere each year.

Since many of the aforementioned technologies are not yet widely available to commercial businesses, what can grocers and convenience stores do in the meantime to reduce leakage? Today, one of the best options is adopting a digital FM solution with built-in refrigerant tracking capabilities. Service Automation technology, for example, both reduces the regulatory risk of failing to comply with the EPA’s Clean Air Act and simplifies refrigerant level monitoring.

Built into the Service Automation platform, Refrigerant Tracking Manager streamlines and automates the scheduling of refrigerator maintenance, repairs, and follow-up verification based on leak thresholds specified by the EPA. This has resulted in up to a 45 percent reduction in leakage rates for customers who have implemented the technology. In addition, businesses who wish to receive the EPA’s GreenChill certification can more easily do so with the system’s advanced reporting capabilities, which automatically submits the necessary data to the EPA.

Refrigerant tracking technology is here, and there’s no reason not to adopt: By keeping tabs on refrigerator performance, preparing in advance for repairs and scheduled maintenance, and accessing high-quality data on consumption, businesses can significantly reduce costs associated with chilling systems while simultaneously contributing to a healthier planet.

Refrigerant leaks are not only detrimental to the business’ financial bottom line – they’re also unnecessarily harmful to the environment: On average, leaks cost a supermarket about 1,000 pounds of refrigerant per year. Depending on the type, a pound of refrigerant can range in price from around $6 to over $100 – multiplied by 1,000, refrigerant replacement costs add up quickly.

With new, sustainable refrigeration technologies on the rise, businesses should consider making the switch to non-compressor-based systems whenever possible. While these new systems may be more expensive up-front, they can ultimately save businesses thousands of dollars by reducing compliance risk – not to mention the costs to replace leaked refrigerant charge. Furthermore, making the switch will allow brands to reinforce their commitment to ‘going green’ (with the option to become GreenChill certified), helping them build a reputation for sustainability, accountability, and environmental responsibility.

Some of these up-and-coming refrigeration technologies are still in relatively early stages of development. While we expect to see rapid growth over the next several years, businesses can minimize their environmental impact by carefully tracking refrigerant leakage, keeping traditional refrigeration systems well-maintained, and upholding EPA compliance.

ServiceChannel Kicks Off Annual Customer Event with Hundreds of Brands, and New Industry-first Offerings to Tackle the Future of Facilities Management

Spotlight on ServiceChannel: Lessons As They Garner A 50% NPS Response Rate