At one point in my career, I was promoted to National Facility Manager for a large petroleum retailer. The transition had started off with great success, and my team was really coming together. Budget numbers looked on track, the facilities had begun to raise their standards and Spring was just around the corner. That is when the wheels started to fall off the bus. 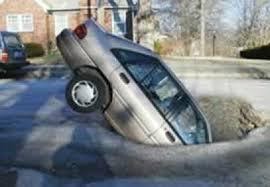 One of the retail locations in Virginia sent in a service request for a huge sinkhole in the parking lot. The cost to repair the huge, dangerous hole was over $15,000. Very soon after that, we had a similar issue at a store in Ohio; cost of that repair was $11,000. By the end of the month, a total of 10 stores had huge sinkholes with repairs totaling over $100,000. As we began to analyze why the sudden rash of sinkholes, we set a full investigation.

In his book QBQ! The Question Behind the Question: Practicing Personal Accountability at Work and in Life, John G. Miller reminds, “Remember: The answers are in the questions.” Here he explains the quality of the answers is found in the quality of our questions. Thus, I began the practice of asking better questions about our repair costs.

In one of my leadership classes, I heard a reference to the 5 Whys Technique. The technique was originally developed by Sakichi Toyoda and was used within the Toyota Motor Corporation during the evolution of its manufacturing methodologies. It is a critical component of problem-solving training, delivered as part of the induction into the Toyota Production System. The architect of the Toyota Production System, Taiichi Ohno, described the 5 Whys method as “the basis of Toyota’s scientific approach . . . by repeating why five times, the nature of the problem as well as its solution becomes clear.” The tool has seen widespread use beyond Toyota, and is now used within Kaizen, lean manufacturing, and Six Sigma. 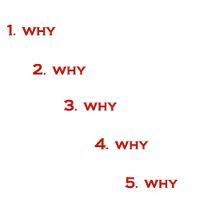 Question 1: Why did we have a sinkhole in the parking lot?
Answer: Water had washed away all the earth beneath the pavement.

Question 2: Why did the water wash away just this one spot?
Answer: It was coming from a leaky pipe.

Question 3: Why did the pipe leak?
Answer: The pipe had frozen over the winter and cracked the pipe.

Question 4: Why did the pipe have water in it over the winter?
Answer: No one shut the water supply off for the winter.

Question 5: Why did no one shut the water pipe off?
Answer: No one scheduled and verified if it was shut off & locked down for the winter.

You can see how by asking why 5 times it becomes really clear on what the next action items or steps should be. So, in just 5 minutes, I used our CMMS to schedule a once-a-year task to shut off all the outside water values on October 1st of each year. The task instructs the maintenance tech. to shut the waterline down; drain the water; lock the value; and take a picture as proof. The next spring we had zero underground water leaks, saving thousands of dollars. My team took this approach to all major repairs and one-by-one, we effectively reduced our repair costs totaling over $2.4 million.

ServiceChannel has a Preventative Maintenance module (PM) that allows you to schedule repeating tasks or 1-time tasks by uploading a list of locations & tasks to the module for future scheduling. For the 10 repairs to the parking lots, we calculated that over 45 hours of administrative / supervision time was being spent. We effectively eliminated these costs and gave my team back 45 hours of their schedule too.

You can see the power of finding the root cause for all your issues & putting in stopgaps to prevent them from happening. This is a great way to build margin into your schedule and your budget. My challenge for you is to find the top 5 expense categories on your P&L for facility maintenance; run through the 5 Why Technique; and put a PM schedule in place this week. Don’t wait till you have time because it will be unlikely to get done. Make the time this week. The 5 minutes now could save you 45 hours and $100,000.

Did you ever have a situation where the 5 Whys could have saved you money?